The Elephant and The Bank Robber

Posted on January 26, 2013 by AnElephantCant 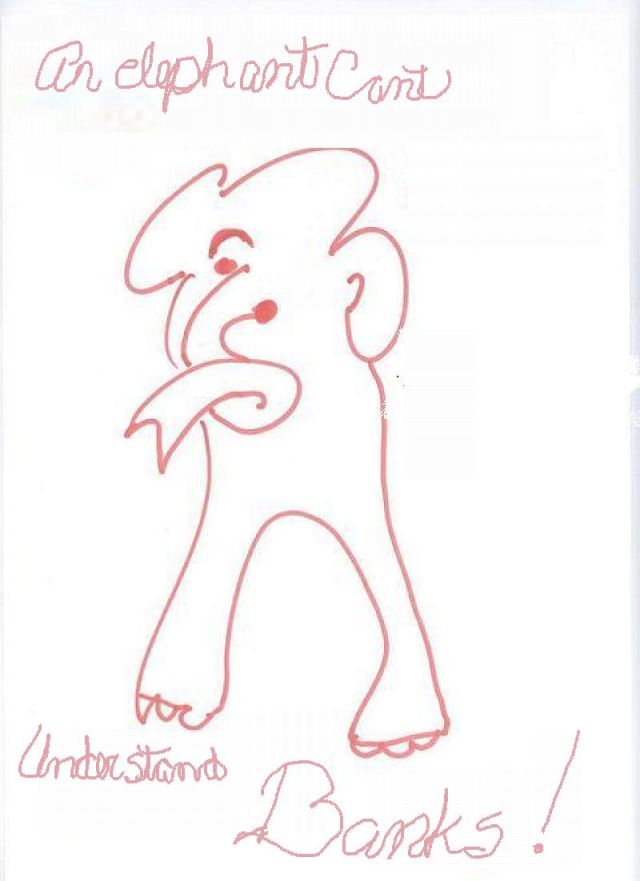 He has an International Cash Passport Currency Card, VISA stamped.
This allows him to put real money, i.e. Scottish Pounds, into an account via a UK agent and withdraw fun money in US Dollars at any ATM in the USA.
This is a clean, simple and cost effective method of getting cash as required.
Safer than carrying large amounts, easier than TCs and not as extortionately expensive as using his Credit Cards for spending money.

So yesterday he needs cash.
He is in a strange town perhaps 20 miles from his hotel.
He pops into a gas station to use the ATM.
Insufficient funds for his needs.
He tries the next gas station.
ATM Out of Order.
He gets directions to the nearest bank, perhaps a mile away, from a friendly local.
He puts in his card and his PIN.
His requested amount is over the maximum (which is significantly less than $1,000 dollars).
He requests the maximum.
It gives him the cash and a receipt.
It does not return his card.
He enters the bank.
There is a host of pretty young ladies behind the counter.
He explains his situation.
They are friendly and sympathetic to his plight.
One offers him candy, to all round laughter.
The Assistant Manager is called.
ID please.
He has credit cards and other picture ID but does not carry his passport.
Cannot get card back without passport, he is told.
Bank rules.
He points out that he is here, he has withdrawn cash, he has receipt, he knows card is in machine, who else can he be?
Bank rules. A form must be filled.
He asks for, and is refused, a receipt for his card.
So at 16.30 on Friday evening he has to drive 20 miles each way to show a lady his passport, to retrieve his own card, which the bank’s ATM has erroneously snaffled.
He does this.
Not being very au fait with the area or the town he is in, this is just a mite stressful.
Traffic is heavy and, understandably at the end of a working week, just a little impatient.
But he returns triumphantly with his passport.
To be told:
We cannot give you your card.
Why not?
It is not embossed with your name.
So?
It is a BANK RULE!
Why?
It is not embossed with your name.
Why is it a Bank Rule that you cannot return my card if my name is not embossed on it?
It is in the Procedures.
So?
He explains very patiently that the machine accepted his card, and his password, and gave him cash and a receipt.
It is the fault of the bank’s ATM that they have what is clearly his card.
And now they will not return it?
It is a procedure.
A computer screen is turned towards him.
See!
He points out that he sees a computer screen filled with many words.
Proof of nothing.
He asks for the manager.
She can’t help you.
He asks for the manager.
She appears, beautifully groomed and quite charming.
They retire to her office.

The above conversation is repeated ad nauseam.

The manager is now very charming.
It is a procedure, she smiles.
AnElephant is also charming.
Facing an increasingly Kafkaesque situation, he resorts to logic.
Then I would like to speak to the person who makes the procedures.
She laughs.
Then I would like to speak to the Bank President.
She stops laughing.
He removes his jacket and settles down in his chair.
He asks her:
Are you planning to leave me homeless and hungry in mid-winter on the streets of a strange town?
She summons assistance.
Get Sylvia on the phone.
Sylvia is apparently the Area Manager or something.
She is on Speaker Phone.
AnElephant once again explains the situation, politely ignoring the manager’s interruptions about procedures and rules.
Take me off speaker and let me speak to the customer.
She asks if the card number is on the receipt.
He tells her the card is apparently under armed guard.
She laughs, and asks to speak to the manager.
The manager listens, very briefly, then summons assistance.
The card is produced, and compared to the receipt.
The numbers, unsurprisingly, match.
Give him his card, says Sylvia.
He thanks her.
A form is slapped loudly in front of him by the lady who was summoned.
Sign here!
Did you forget the ‘please’, he asks with a smile.
Face like thunder, his card is slapped before him.
Thank you, he says, as she storms out of the room.
He looks at the manageress, who has the decency to be embarrassed at this.
Em, she can be a bit ….
She searches for an appropriate word.
Rude, he suggests.
She looks aghast.
Is this the American way, he asks her.
She shakes her head.
He tells her he agrees.
In some 6 weeks in the USA, he has been treated with courtesy at all turns.
People are unfailingly polite and friendly, fascinated by his accent and interested in his tale.
No, not his tail!

You all know that he does like to wander
He is cheerful and not at all dour
He really loves life
Perhaps because he ain’t got no wife?
He treats every day like another adventure

13 Responses to The Elephant and The Bank Robber