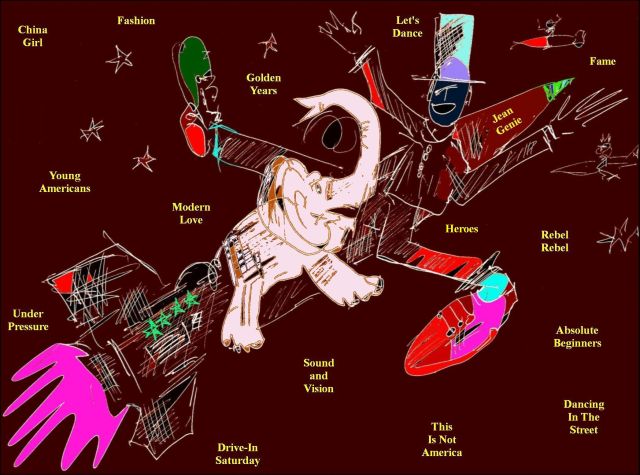 This is way back in Nineteen Canteen
It seems like a lifetime ago
But Davie moves on
Becomes a chameleon
Oh man! Look at those cavemen go, it’s the freakiest show

He reappears as Ziggy Stardust
Changes his image in the blink of an eye
From sailors fighting in bars
To Spiders from Mars
There’s a starman waiting in the sky, he’d like to come and meet us, but he thinks he’d blow our minds

*Major Tom is the only person to appear by name in two different Chart topping songs.
Probably.

Like Loading...
This entry was posted in Daft Rhymes, humour and tagged a starman waiting in the sky, ashes to ashes, berlin trilogy, ch-ch-changes, david bowie, funk to funky, heroes, hunky dory, it’s the freakiest show, jean genie, just for one day, life on mars, Look at those cavemen go, major tom, sound and vision, space oddity, spiders from mars, the stars are out tonight, ziggy stardust. Bookmark the permalink.